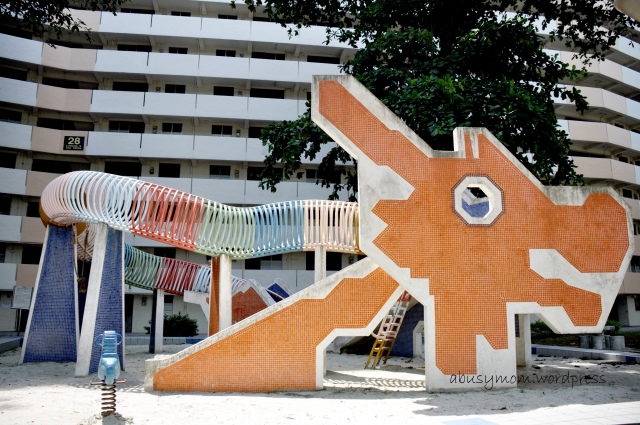 This is one of those old playgrounds that were popular in the 80s. Due to the rapid urbanisation in Singapore, old housing estates were demolised to make way for new ones. There are less than three such playground in the country.

This is the rare one we found in one of the oldest housing estate. The surrounding blocks of residential units are due for demolishing. And this precious find are due for conservation, we hope.

Watching my little one running around the playground, imagining herself escaping from her ‘predators’ brought back a lot of fond memories.

Nostalgic – I recalled how I spent my childhood at a similar playground near my place. Imagining myself as a princess trapped in the castle waiting for my knight. Running around along the ‘spine’ of the dragon to escape for enemies. And not to forget hid-and-seek from mother.

I was admiring the weathered and aged appearance of  the structure.

My little one was too amazed by this new discovery and asked if she could return on another day. I held back and told her I was not certain if the playground would be still there.

And this is the my favourite part of the playground. A beauty isn’t it ?

This entry was posted in At Home, Weekly Photos and tagged home, my missy, postaday. Bookmark the permalink.